The securities regulator on Wednesday urged all banks to make new investments within their current scope to support the struggling stock market.

The Bangladesh Securities Commission (BSEC) suggested three specific ways for banks to invest again during a meeting with CFOs (financial directors) of listed banks at the BSEC office in the capital.

First, banks with less than 25 percent stock market exposure can increase it by 2.0 percent through new investments.

Second, banks that have not yet set up a special fund can speed up the process of raising funds and investing in the market.

And third, banks could issue perpetual bonds that would gain BSEC approval at “ultra-fast” speed and help bolster the capital base of banks below Tiers I and II.

“The meeting was aimed at attracting institutional investment at an accelerated pace…the banks also assured us to strengthen their liquidity support,” BSEC Commissioner Dr. Shaikh Shamsuddin Ahmed said after the meeting.

He said many banks have yet to build special funds while meeting the stipulated stock market exposure limit. “So we think the market can see more investment in the existing perimeter.”

The regulatory decision on new institutional investments came against the backdrop of the recent stock market freefall. 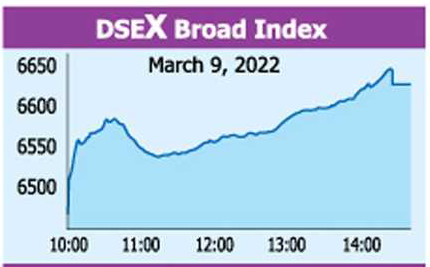 Former BSEC Chairman Faruq Ahmad Siddiqi said the market should be allowed to move on its own strength. “Artificial efforts end up not lasting. So we should depend on real strength.”

He further warned that the publicity of the artificial measures plays a role behind the unusual market rallies. “It leaves a negative impact when the influence of artificial supports wears off.”

When asked, the CFO of Shahjalal Islami Bank, Md. Jafar Sadeq, said he informed the BSEC to consider positively the issue of increasing the exposure by another 2.0%.

“We will talk to senior management in this regard,” he said, adding that the banks have also asked the securities regulator to discuss with the central bank to have the share of perpetual bonds also included in the limit. of exposure.

“The securities regulator has assured us that they are working to exclude the perpetual bond portion from banks’ stock market exposure limits,” Sadeq said.

In accordance with the rules in force, the exposure of a bank is fixed at 25% of the eligible capital including the paid-in capital, the retained earnings, the legal reserve and the issue premium.

And, the exposure is calculated based on the market price of the securities purchased by the bank.

When asked, a senior Bangladesh Bank (BB) official said exposure limits for all private commercial banks are below 25% and the average bank exposure has recently been set at 16%.

“Currently, banks’ average exposure will be at 13-14% following the price correction seen by listed securities,” the BB official said.

He said banks have no impediment to increase their investments in the stock market in accordance with the stipulated exposure limit. “Investments depend on the banks’ own decisions.”

Market traders were previously used to calculate banks’ exposure limit based on the principal amount of their securities investments instead of their market prices.

“As a result of the increase in the scope of new investments, market operators will now realize the positive side of calculating the exposure limit based on the market prices of the securities instead of the principal amount,” said the head of the BB.

The central bank earlier issued a circular regarding the establishment of a special fund worth 2.0 billion taka each to support the stock market.

“We have so far received information regarding the formation of a total amount of funds worth Tk 45 billion, while Tk 30 billion of this fund has so far been invested in the market” , the BSEC official said.

Following the massive price correction, the broad DSE DSEX index lost 182.12 points on Monday – the biggest one-day drop since March 16, 2020. The DSEX had lost a total of 492.16 points from February 24 to March 7 following Russia’s invasion of Ukraine. .

The market rebounded on Tuesday, however, and rose sharply on Wednesday on some regulatory action to cut the lower limit on circuit breakers to 2.0% from 10%, effective Wednesday, to halt the free fall in stocks.

The upper limit of the circuit breaker, however, remained unchanged at 10%, which means that the price of a stock can increase by up to 10% in one day.

The stock market regulator also ordered an investment of 1.0 billion taka in the stock market from the stabilization fund through the ICB to ensure greater liquidity in the market.

Following the news, the market jumped to the open which held until the end of the session with no sign of a reversal.

The stockbroker noted that the market was on the uptrend throughout the session riding on regulatory moves.

Surges in the prices of some large-cap stocks such as Walton, Grameenphone, British American Tobacco, Berger Paints and LafargeHolcim jointly added more than 50 points to the DSEX, according to market data analyst amarstock.com.

However, an analyst said, investors were blindly chasing many low-profile stocks as well as good stocks without performing proper analysis.

“If these stocks undergo a correction, general investors will be the ultimate losers, which will again shake their confidence,” he said, adding that investors should also be careful when buying junk stocks to avoid any misfortune.

Turnover, a crucial market indicator, remained below 8.0 billion taka and stood at 7.73 billion taka, 3.62% higher than the previous day’s tally of 7 .46 billion taka.

The prices of 97% of issues traded increased, as of 378 issues traded, 365 advanced, only three declined and 10 issues remained unchanged on the DSE trading floor.

All sectors closed higher, with seven gaining more than 4.0% each.