Like every Friday, Muslim worshipers had just returned from the mosque on February 12, 2016. Business was about to bubble up again when armed robbers stormed into Ikirun, Osun state with beatings sporadic fires.

Three commercial banks: Union, First and Skye (now Polaris) Bank in the city were attacked in one fell swoop. Banks operated on the same street.

Ikirun is arguably the economic center of an entire federal constituency comprising the LGAs of Ifelodun, Boripe and Odo-Otin. The city is a 16-minute drive from the state capital, Osogbo, and has a population of over 100,000 as of 2015.

For about six years after the incident, no commercial bank operated in the city. And because of its economic disadvantages, the scars still hurt like fresh wounds.

Like some townspeople, Tope Adegoke has lost hope of commercial banks returning to his birthplace. “The thieves completely paralyzed Ikirun. They (the banks) don’t come back, they just deceive us,” he lamented in the Yoruba language with a face detailing only the hope already lost.

Adegoke was an eyewitness to the 2016 robbery attack. His office was located across the road but luckily he escaped being killed in cold blood along with many people including police officers and bank officials who were shot by armed robbers.

Intentionally, Adegoke controls traffic at a junction separating Skye and First banks – both located on opposite sides of the same road leading to the Ekoinde junction in Ikirun.

Three commercial banks robbed at once

So far, security guards from the non-operational Skye Bank in Ikirun are still coming to work. Mr Segun Adeleke, a Skye Bank security officer in his account of the incident, explained how the well-coordinated attack last happened.

Mr Adeleke said the thieves moved freely from bank to bank. “It is the mercy of God that we have received as a pledge [personnel]he said, remembering his life flashing before his eyes. “Two of our counter-officers were killed,” he noted.

However, despite being closed for six years, Adegoke and his colleague are still receiving their salaries. “The three banks did not close [down] at a time. The Union Bank continued to operate for three or six months after the attack, but then closed.

“As for Polaris, I don’t know if they’re coming back,” he hinted.

The impact of the robbery attacks and subsequent absence of banking institutions for a year, as Adegoke laments, has crippled the city and surrounding areas economically.

“It has a big impact on our people. Business is not going as planned again. It’s not even going well at all.

“Because when these banks were still operating, the money withdrawn was mainly spent in the city. But when there is no bank, people buy things where they now withdraw. The economy has been completely destabilized,” he added.

For Iyabo Owolabi, the impact of the robbery attack was no less harsh on his business. As a fashion designer and cotton fabric saleswoman with a shop right across from Union Bank, she said, “When people come to the bank, especially students, they come to us and choose one or two fabrics and tell us to sew it, meanwhile. their returns to the banks or their withdrawal at the ATM.

Iyabo lamented that such an experience disappeared with the absence of the bank.

“Business was still going well when the banks were here. But now we just endure. You know, by saving or withdrawing like #200,000 from the POS, they will collect their own costs as opposed to going straight to the bank,” she added.

Owolabi lamented that this not only affected his business, but also personally. According to her, dealing with banking problems is not as easy as before the theft. “Last week alone, I went to Osogbo three times before I could get an ATM card,” she said angrily. 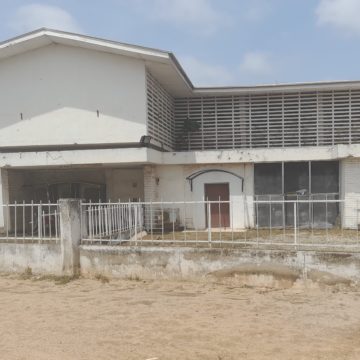 Like Owolabi, Rahmat Ayeni is another shop owner who sells ‘hijab’ and materials for women’s veils opposite Skye Bank. She also has losses to recount, related to the incident.

While his shop is opposite the Skye Bank building, Rahmat lives close by. On that unfortunate sunny Friday afternoon, her elderly grandmother was hit in the leg by a sporadic gunshot that entered their home.

Apart from this, Ayeni said the effect has also been despicable on his business. “You know, if we want to save or withdraw money now, we will use money. Unless you go to Osogbo.

“Business is not running smoothly anymore,” she said, adding that “people are now going all the way to Osogbo to make withdrawals, save money or sort out banking issues, which she says is more risky.

Four years after the attack, the Osun State High Court sitting in Ikirun found three men; Nuhu Jimoh, David Ndubisi and Oluwaseun Aderibigbe, guilty of launching coordinated attacks on the three banks and sentenced them to death by hanging.

“No one can sign such an agreement” – Okanlawon, Ifelodun LG Boss

Residents of the community have described the six-year absence of commercial banks as a harrowing experience for Ikirun and its surroundings, but Ifelodun LGA Chairman Okanlawon Akeem appears indifferent.

In his response, Mr. Okanlawon said that the matter still requires sufficient patience.

According to him, his predecessor was asked to sign a pledge that armed robbers will no longer attack banks in Ikirun before commercial banks can return to the city.

“No one can sign such an agreement,” he said, noting that “if eventually these thieves come tomorrow, [what is] then the person must be arrested because he is the one who signed an agreement that the thieves will not return.

The Council boss has revealed that the said venture is the reason why the Council lost all hope of influencing these commercial banks again in Ifelodun LGAs.

“That’s why we’re not taking any action on it. If they bring it, fine. Not that we’re against commercial banks in Ikirun,” pointing out that “for anyone to sign an agreement that they don’t will be more attacked, no one can sign such a commitment”.

While the aftermath of the robbery attacks has plunged the community of Ikirun and surrounding areas into economic and financial disadvantage since 2016, back-to-back bank robberies on other nearby communities hosting commercial banks have further shattered their hopes.

Osun State has seen a series of deadly attacks in 2021.

In March 2021, a branch of Wema Bank located in Okuku, Odo-Otin local government – about 12 km and 13 minutes drive from Ikirun – was attacked by armed robbers, leaving one person dead and numerous others injured.

Less than five months after the Okuku incident, the branches of United Bank for Africa (UBA) and Access Bank in Iree, Boripe LGA were both attacked simultaneously.

The incident that led to the death of a police officer attached to the bank, Dauda Jelili, did not stay in the news for long before becoming a precedent for subsequent attacks.

On September 28, 2021, a group of around 20 reckless armed robbers attacked the Wema Bank branch in Iragbiji. This time it was a simultaneous attack with the divisional police headquarters located in the city, resulting in the deaths of a newly promoted inspector, Hammed Ogunniyi, and another police inspector, Ayinla Odeyemi, later in a gun duel.

While the banks attacked in Okuku, Iree and Iragbiji in 2021 continue their operations months after the attacks, the residents of Ikirun are still licking their wounds, six years after the bloody attack.

Osun State Police Spokesman SP Yemisi Opalola said in a phone interview that the police were doing enough to provide adequate security in the state, adding that the police could not force the banks to resume their activities.

“It’s been a long time. And we have a safety measure in place to make sure it doesn’t happen again,” she said.

Responding to questions about the measures taken by the Command to curb the incessant thefts in the state, SP Opalola noted that “even banks can see that different types of security measures have been deployed”, however pointing out that the trend flights in the state have followed one another in 2021 and efforts are in place to avoid a possible recurrence.